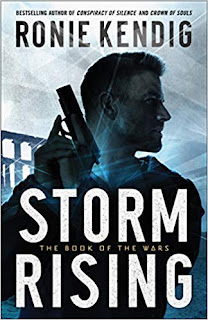 Does an Ancient Book of Prophecy Hold the Answers to Saving the World . . . Or Predict Its Destruction?


Mentioned in the pages of the Old Testament but lost to history, the Book of the Wars has resurfaced, and its pages hold secrets--and dangers--never before seen on earth.

Tasked with capturing the ancient text, former Navy SEAL Leif Metcalfe is once more given command of his own team. But their best efforts are ruined when a notorious Bulgarian operative known as Viorica snatches the volume right out from under them.

Iskra "Viorica" Todorova is determined to use the book to secure the thing that matters most--freedom. But a series of strange storms erupts around the globe, and the coming dangers foretold in the text threaten crops, lives, and entire nations. Though both are haunted by secrets of the past and neither trusts the other, Leif and Iskra must form an uneasy alliance to thwart impending disaster. However, the truth hidden in centuries-old words could unleash a storm of their own destruction.

About the Author:
Ronie Kendig is an award-winning, bestselling author of over twenty novels. She grew up an Army brat, and now she and her Army-veteran husband live outside New York City with their children and a retired military working dog. Ronie's degree in psychology has helped her pen novels of intense, raw characters. Visit her at www.roniekendig.com.

My Thoughts:
I have so many thoughts for this book!  And then my mind is blank trying to figure out what to say about it.  I’ve been a fan of Ronie Kendig’s books for years - she actually is the first to really get me hooked on military novels - and was so stoked for this book!  I’ve yet to be disappointed by any of her books and this one is certainly not the exception.  I was on the proverbial edge of my seat the entire story and only put it down under duress (otherwise known as work) or sleep deprivation.
As always, Ms. Kendig kept the suspense and action going from beginning to end.  I often felt as though I was there with the team, racing against the “bad guys” and the clock.  I loved getting to know this newly formed team of characters, though some of them are familiar from previous stories.  I so enjoyed the banter and general aggravation they use to nudge one another along, as well as Leif’s jokes!  I tend to try not to play favorites with a group of characters like this one, but there are definitely had a couple that I couldn’t resist.  Like the one with a thing for superhero references . . . .  One of my favorite things about all of Kendig’s books is how she’s able to switch the story around from several different perspectives without my getting lost or the story losing momentum.  I find it allows me to get to know more of the team than just the two or three characters that tend to have the leading roles in the story.

I also loved the historical aspects of the book and am now immensely curious about the Book of Wars, because I’m nerdy like that.  I appreciate that this story isn’t just one military op after another, but rather there’s a couple different mysteries going on as well, which I’m hoping will continue to be pursued in the next book.  Speaking of, the cliffhanger here definitely has me incredibly impatient for “Kings Falling”!  Which means I’ll probably just be rereading all of Ms. Kendig’s books until March 2020, when it’s slated to hit stores.

Overall, I would highly recommend this book if you enjoy edge of your seat suspense with some Tomb-Raider-meets-Indiana-Jones-and-probably-some-other-analogy-that-better-suits antiquity action.

*My thanks to the author and publisher for my copy of this book!  I was not required to write a review, positive or otherwise, and have not been compensated for it in any way.  All opinions expressed are my own.

Thanks for stopping by!  I'm super excited to celebrate this book's release!  I've been waiting for weeks to talk about it and now I can share it with you and geek out with some friends who share my nerdiness and excitement for Ronie's books!
As always, purchase and Goodreads and links are below.   :)
Have a ducky day and a great Independence Day!

Sarah
I'm a Jesus-loving, book addict with a chocolate problem. I love writing and pretty much anything that involves words, letters, paper, ink etc. You can find a few things I've written buried among my review posts. I like to share my love of books, as well as a few random things that are on my mind and I may have to do a fangirl post for Captain America one day. :) You can email me at bookluver1492 at gmail dot com

Subscribe To The Important Things in Life: God, Books, & Chocolate